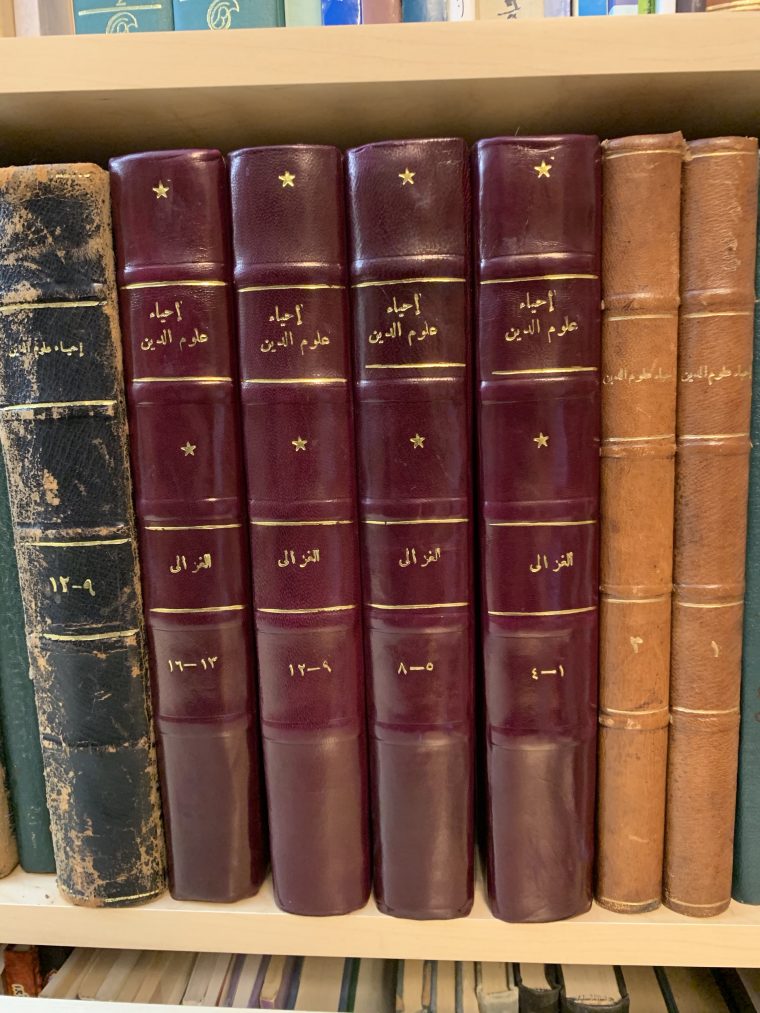 I get this question quite often: is my edition of the iḥyāʾ a good edition?

We need to be more discriminating consumers that demand better of publishers to produce the best possible work. This is in line with the prophetic charge that we as Muslim—in this case producers of knowledge—were given of practicing iḥsān.

There are many editions of the iḥyāʾ in print which begs the question as to why there are so many editions of this book in print. The various edition in print fall into the following categories: Value added editions, reformatted editions and classic editions. I wish there are one more category and that is of scholarly edition but sadly there isn’t one that makes the cut.

Among publishers in Arab world there is a superstition/charm kind of thing that they do and that is that when things are not going well financially and to improve their situation the thing to do is to print and edition of the ihya. I am not sure if this (charm) really works but it explains as to why there are so many editions. If you speak to the publishers some will swear by God that this works. Sometimes they will hire “editor” or more accurately a “preparer” who will work on the book to try to add some value to it or something that someone else’s edition doesn’t have. Therefore, just about every edition is a bit different.

There is one edition that I don’t recommend under any circumstance if you are interested in the integrity of the text and that of the edition that was edited by al-Khāladī for Dār al-Arqam of Beirut where he “felt obligated” to change all Persianisms with “proper Arabic” equivalents and other clear textual issues without having to bother the reader for every change to produce a readable edition that is easy to understand for modern audience. Note that there are changes that one should make to a text as the scribes have taken liberties with the text and used short hand where to modern orthography standards. An example of this is the with alf maqaṣūra and the yaa to properly distinguish them. Even texts in English do this for example texts that are modernized with modern spelling conventions do this not just to Shakespearian texts but to early American texts, be it literature or political tracts, from the 19thto the early 20thcentury.

What goes into preparing an edition for printing:

This is different than the task of Hadith verification and sourcing that is found in the footnotes that passes as textual editing. Another task is identifying and verification of poetry, yet another task is the sources that al-Ghazali used such as Qūt al-qulūb and Ḥuliyat al-ʾawaliyaʾ as well as other Sufi manuals. The goal of an editor is to prepare an edition whose text matches that of what the author actually wrote in his final approved edition. Any variation or issues are mentioned in the footnotes at the exact spot in the text and not just given a casual mention offhand like one editor saying.

These are editions that have something that other editions don’t have. This starts with new printing technology where the text is re-keyed, the Quranic text is copied from the Muṣḥaf and sometimes its printed in two colors. Then various levels of hadith verification is offered, some that go a little beyond adding al-Iraqi’s verification. The will provide Hadith numbers for hadith that are found the six books. In some edition the grading of al-Albani is also added. While others will provide an introduction and biography of Imam al-Ghazālī and al-Iraqi as well. The standard 3 bonus texts are also provided either on the margins or at the end of the book al-Ghazali’s answer to some of his critics, a tract on the benefits of the iḥyāʾ  by al-aydrus and a tract on sufism by al-Suhrawardi. In one edition this is substituted by other books.

There are format publishers who will take books and publish them in one volume editions that are compact. They feature small print of the text in two columns to try to fit as much text on a page as possible and still be readable. These are the sort of portable editions. These are at best unreliable editions and for students of learning its best to stay clear of these editions. Consider these as the summer reading editions. These have no scholarly value and no scholar worth his salt will use them in a study or for research unless one is stranded out in the middle of the Gaza Strip with no access to real books. I think that the text for the most part is pretty much the same.

The old editions were prepared by Azaharī scholars who had access and knowledge of the best available manuscripts to create these early editions. The publishers at the time were physically located near al-Azhar and had access to scholars so they basically worked with scholars to produce what would become standard editions of the classic works that we have today. Most of the books selected were books that were available at al-Azhar library and in various waqf libraries in the vicinity. Rarely did scholars make use of other manuscripts from other areas as they would have to go physically to the manuscripts such as they would travel to Mecca to get to some manuscript that was in the Sanctuary (ḥaram) library or to Damascus to al-dhāhariyya library or to Morocco to al-Qayrawan library. Since a bulk of the collection available at al-Azhar library was primarily Shāfiʿī in interest those got published first. Also, works of luminaries published as well therefore we see quite a bit al-Ghazālī’s works. Also, scholars who were Azaharī were also published as well. Cairo at the turn of the century was the hub of Arabic publishing. Till now the most authoritative edition of Ṣaḥīḥ al-Būkhārī is the Ṣulṭānī edition is the edition that was published by the Būlāq press. An accomplishment have set the standard in textual accuracy. The text set out to present a reliable text and reliability is established by accuracy, adequacy, appropriateness, consistency and explicitness.

Many scholars did so anonymously others were accredited in the colophon in the last volume while others were known in the circle of scholars as they know who did what work [this is handed down by word of mouth]. The typesetting to our modern eyes seems off due to our being accustomed to advances in modern printing technology. Typesetting back then was done using reusable type and set one letter at a time. And if the pages weren’t tightly set in the case after many printings the type shifted a bit -due to being so loose- so you have the second half of the word closer to the first half of the next. This was a result of using older machines and re-using type beyond its useful life. What we gained with readability we lost at great cost to textual integrity.

The publishers needed to quickly print editions to recoup their investment in the printing technology and that limited the financial resources, the time and effort that goes in preparing good quality text.

That is why modern editions are textually comprised as there’s not any real scholarly work on the verification of the text against reliable manuscript copies.  Unfortunately, publishers in their zeal for profit they took the easy path of re-keying the text of the old edition and in doing so introduced errors. Then the editors in their attempt to correct the errors corrupted the text further.

So far the most trustworthy editions are the old ones especially (ʿIsā al-Bābī al-Ḥalabī) the one printed in Egypt 1936 and reprinted in 1957 online at: https://archive.org/details/aheaa-olom.

For one who is learning Arabic these old editions are harder to read as they don’t contain many sentence breaks as the text goes on and on. Modern editions sometimes don’t break the text right.

The best of the modern editions is the 2010 Damascus edition prepared by ʿAlī Muḥammad Muṣṭafā and Saʿīd al-Maḥāsanī that was co-published by dār al-fayḥāʾ and dār al-minhal.

The easiest to read is the dār al-mihāj of Jedda edition of 2011. This last edition is in pdf online at (https://archive.org/details/IhyaGhazali). It’s a good serviceable text for reading with helpful explanations. (Fons Vitae is using this edition as a basis for their translations ) It does not fully explain all the troublesome passages but no edition does save for al-Zabīdi’s line by line commentary.