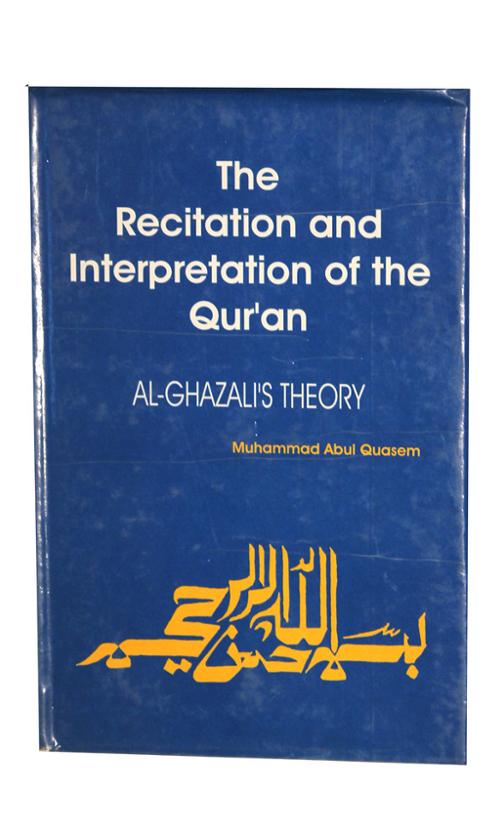 Since the holy Qura’n is the word of God its recitation is not like that of other scriptures or ordinary books. There are rituals and etiquette of Qura’n-recitation which are elaborately set forth in this book. It also contains al. Ghazali’s views on obstacles to Qura’n-understanding and on Qura’n-interpretation according to one’s personal opinion. It is the first English translation, with useful introduction and annotation, of a part of al-Ghazali’s Ihya’ ‘Ulum al-Din in Arabic. The translator has compared eight printed editions  of the Arabic original and established one for translation.

2) THE JEWELS OF THE QUR’AN: Al-Ghazali’s Theory

It shows how a great sufi like al-Ghazali.(d. 1111 A.D.), understands the holy Qura’n, the Scripture of Islam  The first part of the book presents his views on various Qura’nic issues, e.g. the aims of the Qura’n, how the Qura’n is the source of all the sciences, the methods of its understanding, the excellence of some parts of the Qura’n over others, and so on. Part II contains, in translated form, more than 1500 verses which al-Ghazali calls the jewels and pearls of the Qura’n—verses concerned with the two greatest of the six major aims of the Qura’n. The jewel verses concern knowledge of God, while the pearl verses concern the straight path. All these verses are translated in free-flowing, modern English.

This is author’s revised Ph. D. thesis written under the supervision of Prof. Watt, and presented to the Edinburgh University in 1972. It is one of the best books ever written on al-Ghazali.(d. 1111 A.D.), the greatest Muslim intellectual and sufi of all times. It represents in detail his entire ethical system which is an amalgam of Islamic religious ethics, Islamic philosophic ethics, and Islamic mystical ( sufistic) ethics. The author criticizes other writers’ views on al-Ghazali and presents the findings of his own research. It is really an important book.

This book presents al-Ghazali’s views on the beginning part or the outward aspect of Islamic guidance and taqwa (piety). It is only after completing this beginning or outward part that one can proceed to concern oneself with the end or inward part. of guidance and piety. It is a practical manual describing the best way to perform the Islamic devotions, to avoid sins and to behave with God and man. It also specifies what should be the correct motives of acquisition of knowledge.

Both knowledge and action are necessary for salvation. Yet some groups of Muslim intellectuals, e.g. the West-influenced Muslim philosophers, and also many formal Muslim scholars remain content with knowledge and neglect action, believing that mere knowledge is enough for salvation and that action is not needed. Certain groups of erring sufis also neglect action and resort to ecstatic utterances, vain sayings, etc by which they want to show their proximity to God. They all are strongly condemned by al-Ghazali (d.1111 A.D.), the greatest Muslin intellectual and sufi of all times, in his epistle Ayyuha l- Walad. He insists that mere knowledge is not enough; rather action must be conjoined with it. Various aspects of this theme he briefly discusses in the first half of the epistle. Since the correct forms of sufism strongly emphasize action prescribed by the Shari‘a, al-Ghazali, in the second half of the epistle, briefly discusses several basic issues of sufism, such as the characteristics of sufism, the things required at the start of sufistic practices, the need for spiritual guide and his marks, the etiquettes of sufi disciple, what is to be avoided and what is to be accomplished by him and so on.  The ideas al-Ghazali sets forth in the epistle are based on both the Shari‘a and tariqa, and hence this book should be useful to the followers of both disciplines. It is an accurate translation of al-Ghazali’s Ayyuha l- Walad, with a useful introduction, copious informative footnotes, and a scholarly discussion of several aspects of the Arabic text, including its content. The Arabic text is printed with the translation.

The concept of human perfection, basically a philosophic doctrine, is introduced into sufism (Islamic mysticism) by the great Imam al- Ghazali, (d.1111 A.D.) who is regarded as the greatest Muslim intellectual and sufi of all times. He scatteredly discusses this concept in many of his books in different contexts. Prof.Quasem, a specialist in al-Ghazali, has collected al-Ghazali’s scattered views from his numerous books and presents them in the form of a clear-cut  theory. Professor Quasem also shows how the sufistic concept of perfection is harmonized by al-Ghazali with the Qura’nic doctrine of proximity (qurbat) to God. This book is the only one written on the subject so far.

Availability of these books :

1 thought on “New Translations and Studies from M. A. Quasem”

This site uses Akismet to reduce spam. Learn how your comment data is processed.